Posted on January 13, 2019 by beyondnuclearinternational

Artists respond to the devastation of British atomic tests at Maralinga

During the Cold War, more than two thousand atomic tests were carried out by the nuclear weapons powers. They chose to detonate some of these “tests” over the heads of unwilling, and mainly unwitting people, who, having been exposed to the radioactive fallout, were then callously treated as guinea-pigs.

One of the least-known chapters in this disgraceful history is the part played by Great Britain, which tested its atomic bombs in Australia. The tests there took place in the 1950s. There were 12 detonations, mainly at Maralinga and also Emu Field and Monte Bello Islands.

Revelations in a recent book, Maralinga, by Frank Walker showed how British scientists secretly used the affected Australian population to study the long-term effects of radiation exposure, much like the Americans did with Marshall Islanders. Although the scientists involved began by testing animal bones, they soon moved on to humans. A directive was issued by UK scientists to “Bring me the bones of Australian babies, the more the better,” an experimentation that lasted 21 years.

As John Grey describes it in his 2014 review of Walker’s book, “A staggering 22,000 corpses of children and young people were pilfered for bones and tested for strontium 90 (one of the poisons that entered Australia’s water and food supplies because of British nuclear tests in our country). Families were not told, autopsy workers were bribed, results were not revealed — and all with the meek acquiescence of our government.”

As Grey also found in Walker’s book, Australian servicemen were willfully exposed and Aborigines had “their traditional lands stolen from them and poisoned,” and were then “left in the test region to be killed by the fallout.”

Much of the horror of Maralinga became the inspiration for a new art exhibition — Black Mist Burnt Country. According to its curator, JD Mittmann of the Burrinja Dandenong Ranges Cultural Centre, the exhibition “revisits the history of the test program at Maralinga, Emu Field and Monte Bello Island, through works by Indigenous and non-Indigenous artists across the mediums of painting, printmaking, sculpture, photography, music and new media spanning seven decades.” 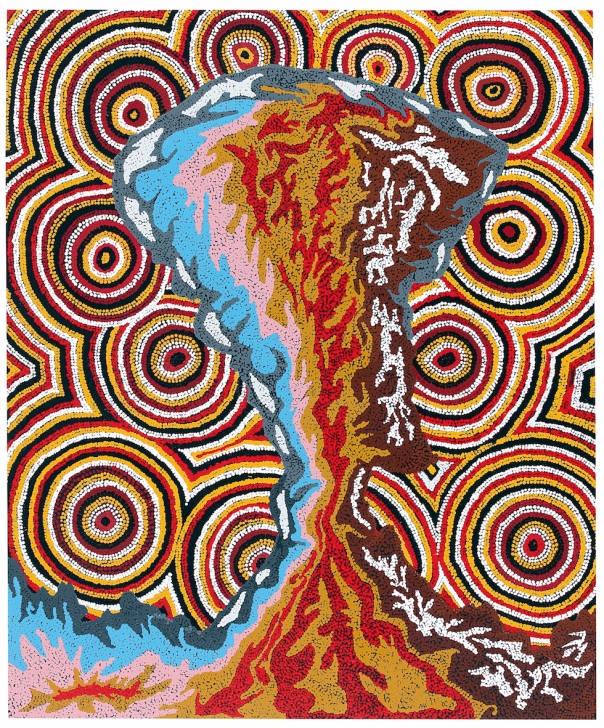 Destruction 2 by Hilda Moodoo, (Pitjantjatjara, b.1952)

“On 27 September 1956 the British exploded an atomic bomb on Pitjantjatjara land in the southern part of the Great Victoria Desert of South Australia. The place would become known as Maralinga. It was the first of seven British atomic tests at Maralinga in 1956 and 1957. These were accompanied by over 600 so called ‘minor trials’ until 1963, which caused additional longterm contamination with highly toxic substances such as plutonium and beryllium.

“The Maralinga tests were indeed not the first the British Government conducted on Australian territory. Three atomic devices were detonated in the Montebello archipelago off the coast of Western Australia and a further two in Emu Field, about 250 km north of Maralinga. Yet it was the term Maralinga, which means ‘thunder’ in the now-extinct Garik Aboriginal language of the Northern Territory, which gave this dark part of Australian history its iconic name.

“Atomic testing in Australia resulted in the forced removal of its original inhabitants, the Anangu Pitjantjatjara people, and their exposure, as well as that of military and civil personnel to radiation. The test program caused radioactive fall-out across the Australian continent and resulted in the desecration and devastation of Aboriginal country.

“Black Mist Burnt Country is a national touring exhibition concerned with the British atomic tests in Australia in the 1950s and ‘60s. It revisits the events and locations through the artworks of Indigenous and non-Indigenous contemporary artists across the mediums of painting, print-making, sculpture, photography, video and new media. 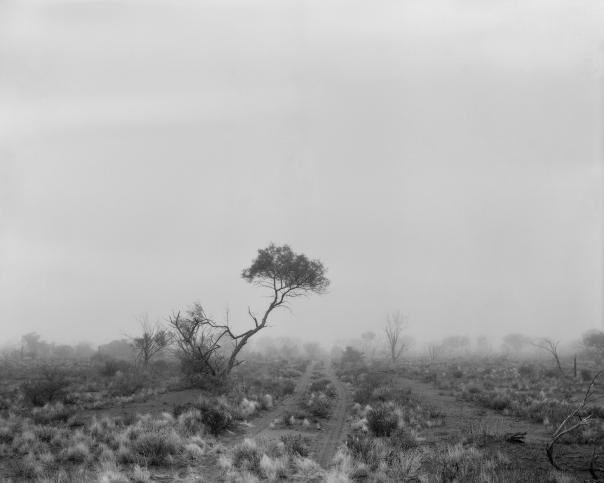 The works in the exhibition collectively span a period of seven decades, from the first atomic test in Hiroshima and the post-WW II era, through the times of anti-nuclear protest in the late 1970s and early 1980s to the present day.”

The exhibition began its tour in Sydney on 27 September 2016, marking the 60th anniversary of the first atomic test at Maralinga  and is currently touring nationally until February 2019.

Headline photo: Tjarutja Tragedy, by Blak Douglas (b.1970), a descendant of the Dharug of the Sydney area. Clouds for 23 prime ministers hover over a scorched landscape. A ghostly traditional hunter walks the barren land.