Cindy Weehler gave a powerful speech during the March 1, 2022 press conference at the New Mexico Capitol about why you should care about the expanding mission for the Waste Isolation Pilot Plant (WIPP).  People are opposing the Department of Energy (DOE) WIPP expansion plans that violate the law.  We provide Weehler’s speech below.

Weehler is Co-Chair of 285 ALL, a neighborhood issues awareness group based south of Interstate 25.  Before the press conference, she presented over 1,100 petition signatures to the Governor’s Office.  The petition reads:

New Mexicans call on Governor Michelle Lujan Grisham to stand up for public health and the environment by stopping the expansion of the nuclear waste facility called the Waste Isolation Pilot Plant (WIPP) in southeastern New Mexico.

New Mexicans oppose the nuclear waste expansion at WIPP because:

We strongly support, and urge our Governor to take all necessary actions, including denying permits for the piecemeal expansion.

* Federal law and legal agreements with New Mexico clearly limit how much waste WIPP can take, as described in the April 2020 National Academy of Sciences Report – Review of the Department of Energy’s Plans for Disposal of Surplus Plutonium in the Waste Isolation Pilot Plant.  https://www.nationalacademies.org/news/2020/04/doe-plan-to-dilute-and-dispose-of-surplus-plutonium-at-new-mexico-site-technically-viable-if-security-execution-other-challenges-are-addressed-says-new-report

Press Conference Comments of Cynthia Weehler, Co-Chair of 285ALL

“I’m calling out the DOE and WIPP today.  They have covered up the new mission so that the public and our elected officials either don’t understand it or don’t even know about it.  They refuse to meet with us.  They distort the facts given to the media, even redefining words like transuranic so it now means “not that harmful,” when it means nothing of the sort. They try to break the expansion up into pieces so each one, separately, looks innocent. They act as if they can play [the] public; we disagree.

“So let me be clear, DOE is changing WIPP in every fundamental way, and it will have a huge effect on us:

“This information comes from the Federal Register and the National Academies of Sciences. 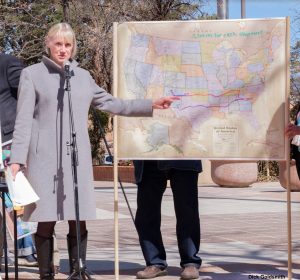 “New Mexico agreed to host WIPP after carefully crafting agreements that limit what the federal government can do with it. It was afraid that this very thing would happen, and DOE didn’t disappoint. WIPP’s mission can only be changed if the DOE breaks every legal agreement that it made with NM in order to get it to host the WIPP site in the first place. These agreements are still in place, it is illegal to break them without changing the law or the permits, and New Mexico simply needs to insist they be honored, something the New Mexico Environment Department has refused to do.

“The DOE is right to withhold this information from New Mexicans; unethical and illegal, but it’s the right thing to do. Because when the public is told, it says, “no.”  Over 1,000 New Mexicans from all the zip codes shown on this map signed this petition as soon as they saw it. This is the first any of them had heard about WIPP expanding; the first time the risks had been explained.

“Today, we delivered the petitions to the Governor.  The signers ask for her protection from this federal overreach.  We ask her because she has the tools, in the form of those agreements, to stop this. The petition says that her constituents support any actions she takes to protect them from this planned expansion and that it’s time for the DOE to find other sites for new waste. We have requested a response by March 15.

“New Mexico has done its part.  Our agreements should be honored. 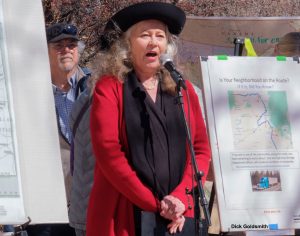 Commissioner Hansen speaking at the event

We made them in good faith, and the DOE should not be trying to pull a last-minute bait and switch by bringing waste to WIPP that wasn’t agreed to.

“Most importantly, the DOE doesn’t get to put us at risk quietly, in secret, and in an information blackout.  If it wants to try to put us at risk, it had better do so openly and in the full light of day.”